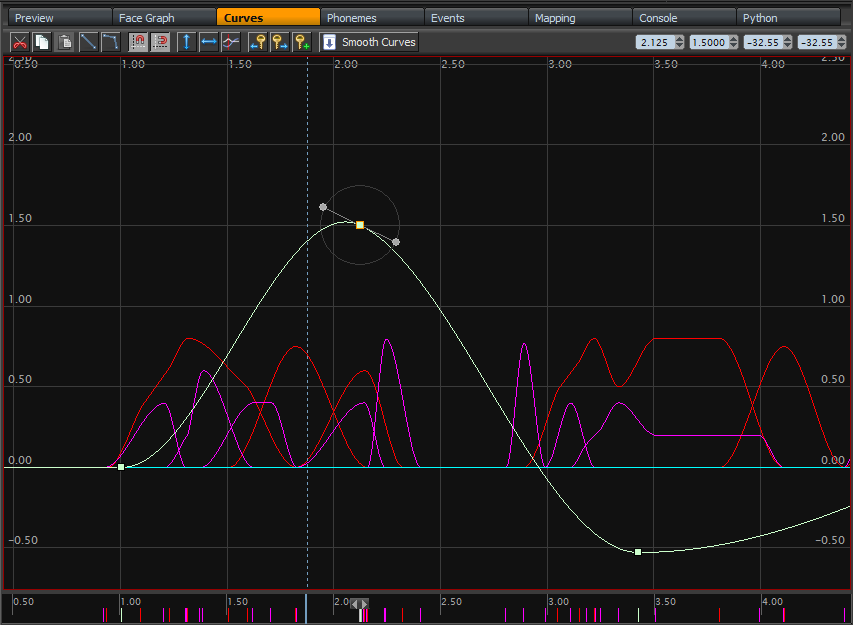 The FaceFX Studio Curve Editor is unlike most curve editors because the animation curves are not solely responsible for driving the nodes. Nodes can also have inputs from other nodes which are added to the animation curve values, or from events in the animation’s take. As a result, the keys in a node’s curve do not determine the final value of the node. Instead, the keys create an offset curve which is added to the value calculated from the node inputs, then subjugated to the node’s min and max values. The resulting curve is called the virtual curve. Virtual curves are represented by dotted lines in the curve editor and they can be seen only when a node has inputs from other nodes, or the offset curve goes outside of the node min/max values.

When a node does not have any inputs, you can not see the dotted virtual curve, only the solid line connecting the keys. When a dotted line exists, it represents how the node will actually be evaluated over time.

From the curve editor, you can copy and paste keys from one curve or animation to another.  You can also paste keys to a different time in the same animation.  Pasting keys between different instances of FaceFX Studio is supported.